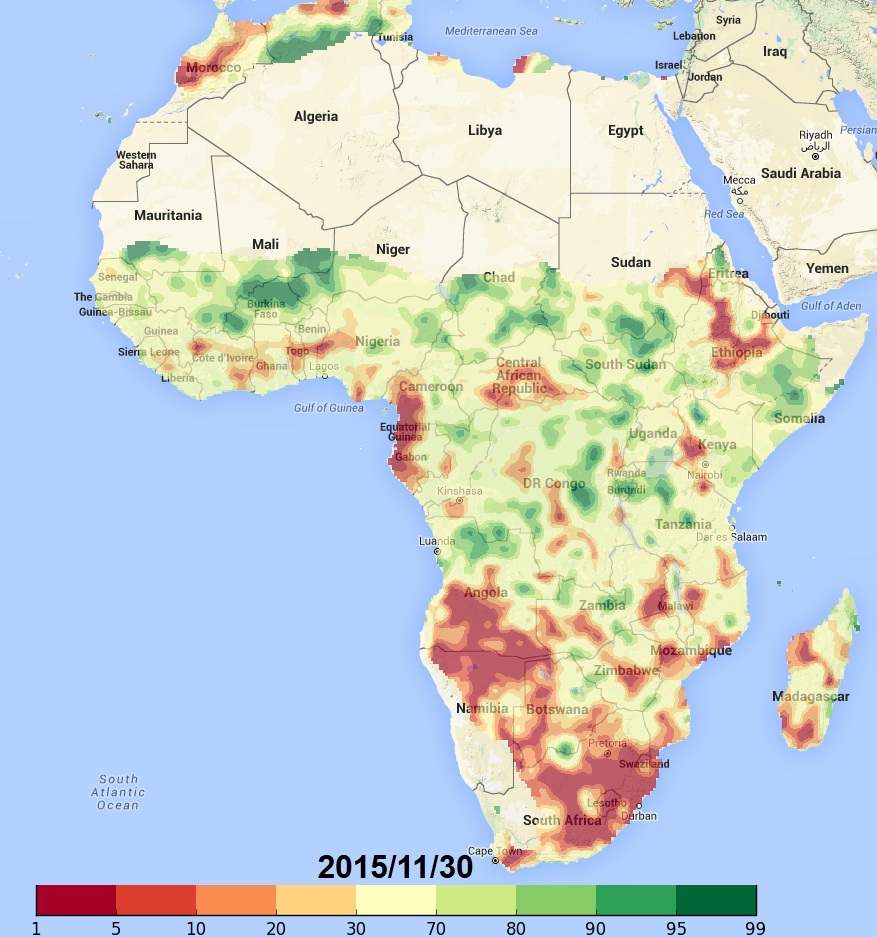 Developed by Princeton University, the AFDM monitors and forecasts meteorological, agricultural and hydrological drought at various temporal and spatial scales. It also has a multi-decadal, historical reconstruction of the terrestrial water cycle against which current conditions can be compared. In 2016 and 2017 alone, AFDM data and information have been used for:

Drought Resilience: Controlling for drought variables with the AFDM helped USAID establish that a) the overall shock exposure in Niger vs. Burkina Faso during their RISE study was due to insect invasions and food price increases, not climate; and b) their market-based interventions in the PRIME program in Ethiopia were effective.

Health and Epidemiology: a) Temperature drives both tsetse fly relative abundance and trypanosome prevalence in Tanzania; b) Risk of cholera transmission in Cameroon varies with average daily maximum temperature and with the precipitation levels over the preceding two weeks.

Impact of Irrigation Dams: Use of AFDM drought indices helped show that in northern Nigeria households downstream of the dams were less affected by drought and enjoyed more stable growth rates and food consumption than those upstream or in similar but undammed basins.

Human migration: Rainfall shortages and excess temperature, with soil moisture as an additional important factor, are strong drivers of out-migration from South Africa, especially for black and low-income migrants.

To build capacity for drought monitoring in Southern African Countries, the Princeton University’s AFDM team held a workshop in Harare, Zimbabwe in November 2016. Co-organized by WaterNet and the Southern African Development Community (SADC), the workshop demonstrated the applications of the AFDM for about 30 water professionals from SADC countries and the WaterNet Secretariat. The AFDM was also featured as part of the training course on “Applying Satellite Remote Sensing For Water Resources Management in Africa” held in January 2019 in Pietermaritzburg, South Africa.

For additional information, visit the G-WADI or Princeton websites or contact Justin Sheffield.