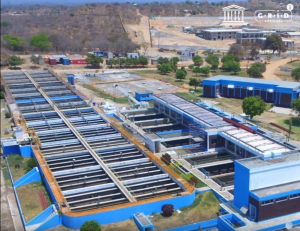 On November 18 at UNESCO Headquarters in Paris, a digital interactive exhibition titled “Droughts in the Anthropocene” was kicked off as a side event to the fortieth session of the UNESCO General Conference. The exhibition was displayed at UNESCO from November 18-27. It will also be displayed at the 25th Conference of the Parties (COP 25) of the UNFCCC.

The exhibition uses case studies from around the world to showcase the social, environmental and cultural impacts of droughts and water scarcity. It also presents solutions created collaboratively by scientists and local communities, with the support of IHP and partners, in bridging science with society and policymakers to better address the impact of droughts in the future.

The contributions of ICIWaRM, and especially its Climate Risk-Informed Decision Analysis (CRIDA) – a bottom-up, risk-based water management and decision-making framework – were well highlighted at the exhibition. These included case studies from: 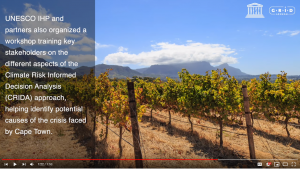 The CRIDA report can be downloaded from UNESCO, ICIWaRM or the Alliance for Global Water Adaptation (AGWA).

The Chile study also referred to the Latin America and Caribbean Drought Atlas, a tool that allows users to visualize drought exposure by identifying both the variability of rainfall deficits and how this climatic variability differs spatially within the country, even at short distances. ICIWaRM was one of the collaborators in the creation of the Atlas, whose development was led by our sister category 2 center CAZALAC of Chile.