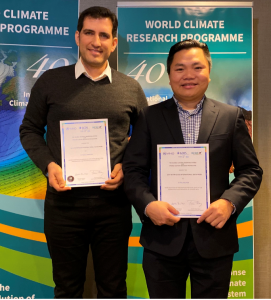 ICIWaRM and G-WADI collaborators Phu Nguyen and Hamed Ashouri, both of the University of California, Irvine’s Center for Hydrometeorology and Remote Sensing, have been co-awarded the 2019 WCRP/GCOS International Data Prize “in recognition of innovation and excellence in the preparation and provision of climate data.” Michel Rixen, Senior Scientific Officer of the World Climate Research Programme (WCRP), stated that the Prize Committee “was greatly impressed by their strong profile and the high quality of their contribution to the development of climate data sets.”

Dr. Ashouri developed and has extensively tested PERSIANN-CDR: a daily precipitation climate data record from multi-satellite observations for hydrological and climate studies. It is one of the most prominent climate data records hosted by NOAA’s National Centers for Environmental Information. 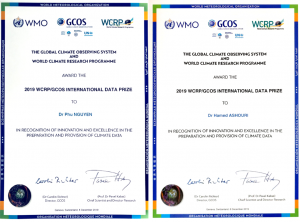 These CHRS products have been associated with UNESCO IHP and G-WADI since their creation. The diffusion of knowledge by UNESCO has been a key factor in raising the community impact of this work because, in making the selection, the Committee considered the global impact of the data and information in addition to its scientific contribution.

The WCRP and The World Meteorological Organization’s Global Climate Observing System (GCOS) have established the Prize in recognition of the essential role of data sets in supporting climate science. The prize is awarded annually for an outstanding contribution to data product generation, data management, data preservation, data monitoring, and other data relevant activities by an early- to mid-career researcher.