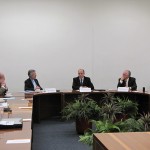 Participants at the MOU signing ceremony.

a Memorandum of Understanding (MOU) with the National Autonomous University of Mexico (UNAM) and its Water Network. The purpose of the agreement is to promote research and capacity building, develop technical activities and foster networking between the organizations. IWR/ICIWaRM and UNAM intend to pursue cooperative opportunities in integrated water resources management, modeling tools, river engineering, environmental restoration, and capacity building and training. This agreement was signed by IWR and ICIWaRM Director Robert A. Pietrowsky and UNAM General Secretary Sergio M. Alcocer Martínez de Castro.

Following the signing ceremony, IWR/ICIWaRM personnel attended the First International Meeting on Wetlands hosted by UNAM and the National Water Commission (CONAGUA). A U.S. government interagency wetlands team participated in the meeting, including representatives from IWR/ICIWaRM as well as the USACE Cold Regions Research and Engineering 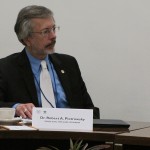 Participants at the MOU signing ceremony.

Laboratory (CRREL), EPA, U.S. Fish and Wildlife Service, USGS and NASA. The World Bank, The Nature Conservancy and other non-governmental organizations also took part in portions of the meeting, which was held November 4 – 5 on UNAM’s Mexico City campus.

RAUNAM is a knowledge network that generates, stores, distributes and analyzes knowledge on water issues from an interdisciplinary perspective. It has been organized by the community of UNAM in order to facilitate the transfer of knowledge and the development of joint efforts to deal with the country’s water problems through an outstanding capacity to tackle complex national problems.