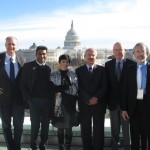 Management (ICIWaRM), under the auspices of UNESCO, held its inaugural advisory board meeting on December 4-5, 2012. The meeting was held in cooperation with the U.S. Department of State. ICIWaRM is an international water resources technical center at USACE IWR and is the only UNESCO International Hydrological Programme Category 2 water center in the United States.

The advisory board reviewed the center’s accomplishments from 2009 through 2012 and offered advice regarding its strategic direction. The feedback from the board was uniformly positive, particularly with regard to the center’s collaborative approach to capacity development in Latin America, Africa and the Asia-Pacific regions. The meeting included a presentation about IHP’s next phase, known as IHP-VIII, as well as discussion of a proposed strategy for ICIWaRM moving forward in the context of IHP-VIII.

ICIWaRM is officially affiliated with the United Nations’ global water network through a 2009 U.S. Government international agreement executed by USACE. The Honorable Jo-Ellen Darcy, Assistant Secretary of the Army (Civil Works), attended the meeting as the ex-officio chair of the board, along with State Department officials from their Office for International Organizations, the head of the United Nation’s International Hydrological program, and Dr. Blanca Jimenez from Mexico. Also attending were scientists and engineers from the U.S. Geological Survey and ICIWaRM’s partners, as well as participants from the American Society of Civil Engineers, American Water Resources Association, Oregon State University, Colorado State University, Florida International University, University of Arizona and the Institute for Water Education (IHE) in Delft, Netherlands. Other Advisory Board Members appointed by the United Nations include water resources specialists from South Africa, United Arab Emirates, Turkey, China, Brazil and Hungary.

More about the Participants