ALEXANDRIA, VIRGINIA – March 4, 2013.The International Center for Integrated Water Resources Management (ICIWaRM), under the auspices of UNESCO, has developed a non-proprietary piece of software named 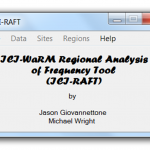 the ICIWaRM Regional Analysis of Frequency Tool, or ICI-RAFT. The purpose of ICI-RAFT is to estimate the frequency/intensity of a rainfall event of a particular duration using rainfall observations on the ground. The goal is to be able to answer such questions as:

The problem that can occur when attempting this type of analysis is that there is not sufficient rainfall data to make accurate estimates of rainfall intensity at a specific location. This is especially true in arid and semi-arid regions where rain gauge sites are few and far between and where the measurements taken at those sites where rain gauges do exist may contain numerous and/or long periods of missing data. ICI-RAFT alleviates this problem by using a method whereby several 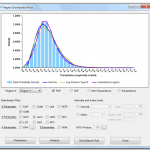 sites with similar characteristics (e.g., elevation, longitude, latitude) are grouped into a “region.” All data from all sites within a particular region, regardless of missing data and varying record length, are then used to make estimates of rainfall intensity and frequency at a specific location within that region.

ICI-RAFT has been formally reviewed and approved by the Hydrologic Engineering Center. It is now freely available to the public. Jason Giovannettone has presented ICI-RAFT and a few preliminary studies that were performed using ICI-RAFT at the 2011 American Geophysical Union meeting in San Francisco, at the 2012 American Meteorological Society meeting in New Orleans, and at the “2nd EuroClima Workshop on Desertification, Land Degradation and Drought” in Natal, Brazil in October 2012. ICI-RAFT is of great interest in Central and South America, while its use is also an 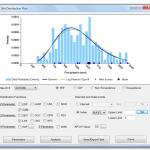 ICIWaRM is a Category II UNESCO center located at the USACE Institute for Water Resources (IWR). The lead programmer for this effort is Jason Giovannettone of IWR with assistance from Michael Wright, also at IWR.